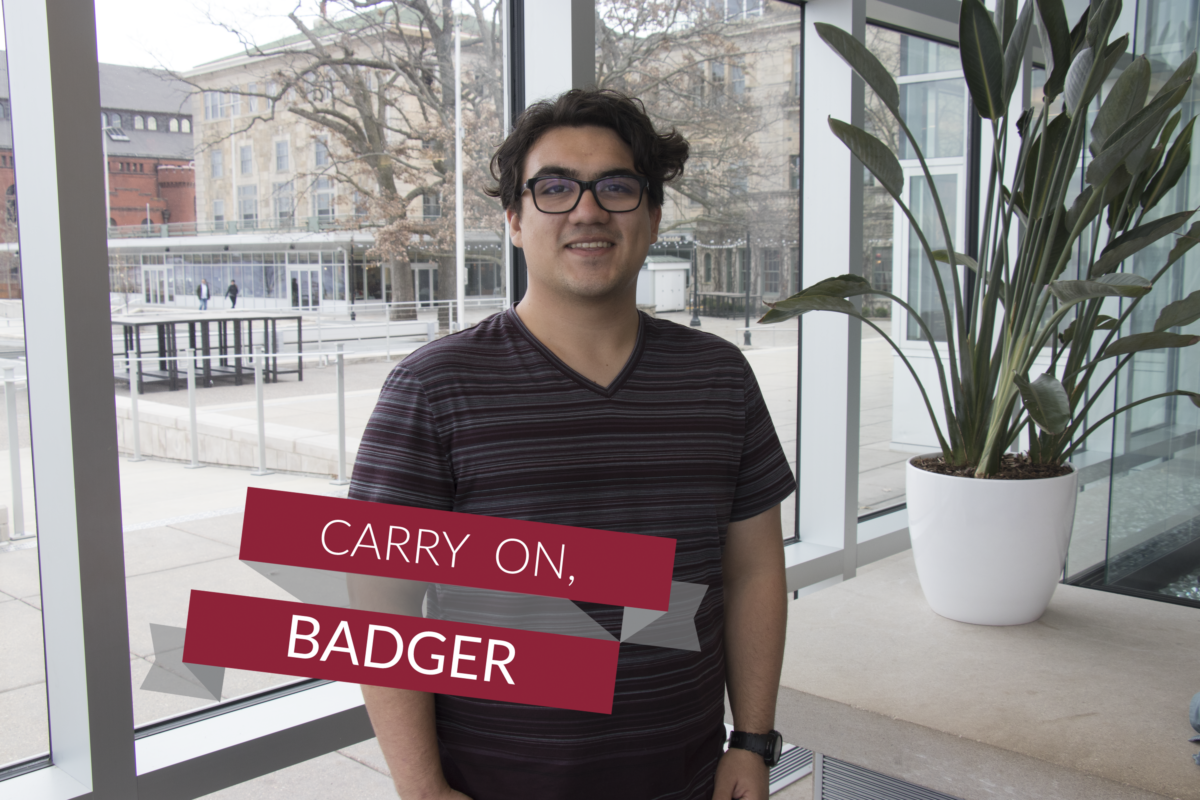 Adam Villanueva will be walking across the stage to receive his diploma from UW-Madison at the end of this semester. After five years, a change in schools and several smaller steps along the way, it has been a journey a long time in the making.

As he prepares to cross that stage, he shares a piece of advice for other students looking towards their next step.

“Take a step back from everything. Don’t think that your future is so close…even as a senior in college. You still have years and years of experience to shape your future and what your end goal is,” Adam said.

When asked if he has that end goal in sight for himself, Adam was quick to respond.

“I don’t. And I’m fine saying that. Being at peace with saying that is another thing,” he said.

That peace did not come easy for Adam. He began his freshman year as part of the Chancellor’s Scholars program. After failing to meet the minimum GPA requirements his first semester, he decided to continue down the chemical engineering path he was pursuing.

While his ambition ran high, his GPA continued to dip lower.

“Next semester comes along, same thing. My GPA got even worse and I couldn’t keep up with the classes. But I was too stubborn to look to other majors and go outside of that realm of comfort,” Adam said.

After failing to meet the GPA requirements the following semesters, Adam sat in his fourth disciplinary meeting on the verge of tears. He was told he would be placed on academic probation.

With this news, he began to search for a new major through the Career Exploration Center. He found something else he was passionate about: environmental sciences. After switching his classes, however, he was still stressed about the situation and did not perform well academically. He was ultimately dropped from the university.

At that point, he considered admitting defeat.

“Instead of giving up, which I could have done and considered doing for a little bit, I  started looking into what I had to do to get back enrolled in the university and keep pursuing environmental sciences,” Adam said.

That determination led him to MATC, or Madison Area Technical College, where he enrolled for a year. There, he found small class sizes and approachable teachers that helped him gain his confidence back.

After a year at MATC, he applied to UW-Madison again–and was accepted. Now completing his senior year, he will graduate this winter with a Bachelor’s degree in Environmental Sciences.

Reflecting on this journey, he considered what motivated him to keep going.

“I had a lot of support from my parents. The furthest my mom earned was an Associate’s Degree and my dad worked in asphalting, a union job. Seeing that, I wanted to make a difference and focus on something more,” Adam said.

He also found support in his community, at both UW-Madison and MATC. Adam spent this past summer working with a group called WisCorps on various conservation-focused projects, from building bridges and picking invasive species to helping the city of La Crosse recover after a big storm.

“I liked doing projects that made a difference. But my goal now is to focus on what I can do more big-picture, especially in environmental sciences, because there’s so many areas of research,” he said.

While he now prepares to cross the stage at commencement, he looks back on his experience and what others can take away from it.

“Some people have it all laid out for them. They have the background and the upbringing to shape it, but for a lot of other people, it doesn’t come as naturally. Don’t give up when things get too rough.”

If you’re facing challenges in your academic career and don’t know where to turn, reach out to the Dean of Students Office by phone at 608-263-5700, via email at dean@studentlife.wisc.edu or in person at 70 Bascom Hall.

This feature is part of our #CarryOnBadger campaign to promote resilience among our UW-Madison students. Share your story of resilience or an encouraging message to your peers using the hashtag #CarryOnBadger on Facebook, Instagram or Twitter an you’ll be entered to win a $25 gift card to the student unions.

Want to be featured in the campaign? Email us at admin@studentlife.wisc.edu to learn more.