After gearing up to attend La Universidad de Complutense in Madrid for a semester, Ron Steinhoff, now senior class president, found himself in an unusually dismal circumstance.

His first few weeks abroad in Madrid were full of new experiences. Ron stayed with a host family for a bit and was pushed to only speak Spanish, bringing him out of his comfort zone. Suddenly, however, things began to spiral downhill.

As he just started to adjust to living in a new country, his girlfriend broke up with him; something that took him by surprise. While struggling through the emotion of a break-up, Ron became ill with a viral-infection, landing him in a local hospital for two days. Two separate times he found himself in the hospital for being sick during his time abroad.

Just when he thought the situation couldn’t get any worse, he received an email declaring he did not get a scholarship that he applied for.

“I felt isolated abroad and I was mostly depending on myself and my faith.” Ron said, “Classes became difficult and it was as if everything around me was going wrong.” He didn’t lean on much; just some friends he met abroad and his best friends and family who were back in the states.

Tired of being told “no” or feeling as if he wasn’t good enough, Ron decided something needed to change; he determined that he would run for senior class president.

He reached out to his friends and started a campaign to get himself in the running for the position. There were posters put up around campus, texts being sent, and student organizations that were talking about it. Even being 4,000 miles away, Ron was able to reach out to his peers with the help of his friends who were still in Madison. 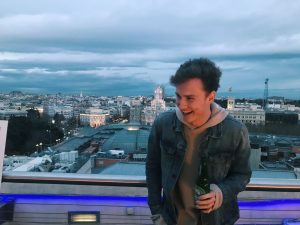 Election Day came, and shortly after, word came out that Ron received the position of Senior Class President; finally, some good news that came his way.

Looking back, Ron mentioned he would never regret going abroad and overall, he felt it was a positive experience. He believes he would not be where he is today if it wasn’t for those things happening.

Ron is now extremely involved in campus including his association with The Lodge (Chi Psi Fraternity), being President of the Honors Student Org, President of the Political Science Honors Society, on the executive board of Greek Intervarsity, and a member of BadgerSpill.

As Senior Class President, Ron is now an advocate of implementing women’s empowerment, education, and well-being, along with trying to create a statue for the Class of 2019 on campus. He looks forward to leading the class to graduation for the rest of the year.

When asked to reflect on his experiences, Ron gave a couple pieces of advice. He urges other Badgers to, “Find hope in something that isn’t just your situation. What happens to you and your situation doesn’t define who you are; it’s how you respond to those changes that does.” He also suggests, “Give yourself time to grieve the hard things, while recognizing that not everything in life will go your way.”