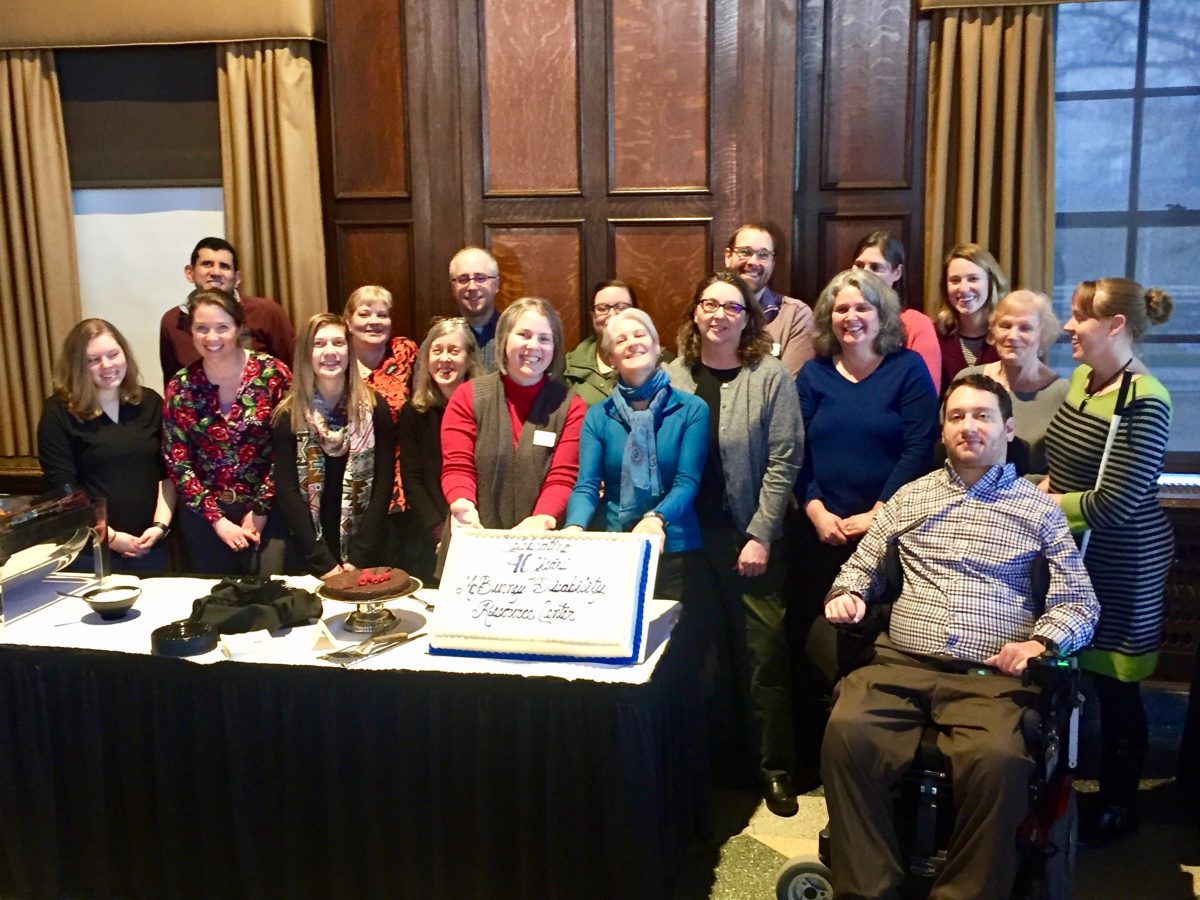 Over the past year, the McBurney Disability Resource Center has been celebrating its 40th anniversary on the University of Wisconsin-Madison campus, an accomplishment based on a deep-rooted and vibrant history.

Founded in 1977, the McBurney Disability Resource Center provides access and support to students with disabilities at UW-Madison. Originally in a small borrowed space in Bascom Hall, and with the backing of just a few passionate people, the center has expanded significantly over the past four decades and continues to make a lasting impact in the UW-Madison community.

The McBurney Disability Resource Center was established in memory of Floyd Michael McBurney. Born and raised in Madison, WI, McBurney sustained a cervical spinal cord injury in a fall off a pier at age sixteen. Like other individuals with severe physical disabilities in the 1950s, Mike faced a future containing physical and social barriers reflective of the times. Undaunted by his quadriplegia, however, and with the support of family and friends, Mike enrolled at UW-Madison a year after his accident.

After graduating Phi Beta Kappa in 1960 and earning a law degree at the UW School of Law in 1963, Mike practiced law for three years before being elected Dane County District Attorney in 1966. Sadly, Mike died shortly after taking office in 1967 and the dreams and ambitions he held were cut short.

While an undergraduate student at UW-Madison, Mike’s sister Georgianna McBurney Stebnitz introduced Mike to James Graaskamp. Graaskamp, a faculty member in the School of Business and a fellow wheelchair user, became a close friend and mentor to Mike. Following Mike’s death, Graaskamp approached the McBurney family with the idea to use the contributions made in Mike’s memory to start a formal disability services office. Working with Dean of Students Paul Ginsberg and Assistant Dean Blair Mathews, the McBurney Center was founded in 1977.

The expansion of services offered by the center comes from a variety of new and ongoing campus partnerships and collaborations.

“There have been important collaborations between the McBurney Center and Department of Information Technology (DoIT) – in working on IT accessibility; the Testing & Evaluation Center – in providing space and proctors for students with disabilities when faculty are unable to provide the needed exam accommodations; Student Assessment Services – in providing funding support for students who are seeking psychoeducational evaluation and are unable to afford the fee; and the list goes on,” says Mari Magler, an assistant dean in the Division of Student Life and current director of the McBurney Disability Resource Center.

Cathy Trueba, who previously served as an assistant dean in the Division of Student Life and the director of the McBurney Disability Resource Center from 2006-2016, highlighted some of the important changes the center experienced during her tenure.

“The 2011 move from the temporary center location at the old Middleton Library on Linden to the new and current location at 702 West Johnson was a significant milestone.” Trueba stated. “The new location gave students and staff amazingly beautiful and accessible space, a technology lab, a student organization office, two conference rooms, and placed us in a highly visible location on campus. It is an excellent demonstration of the campus commitment to student access.”

Now serving in a new role as the director of the Office of Compliance at the university, Trueba recalls the hard work of the staff and the positive influence the center had on students.

“The staff is endlessly creative and committed and willing to try new things and that keeps the work interesting and cutting edge. And of course, all the students who have benefitted academically and personally from the accommodations and the relationships they have formed with staff is at the heart of the work and will also be a special part of the memories I have about my career there,” Trueba stated.

Trey Duffy, the center director from 1989-2005, also highlights how the McBurney Center and its staff have made a difference not just on campus, but on disability service practices nationwide.

“The University of Wisconsin-Madison and the McBurney Center adopted a model of addressing accessibility needs that previously did not exist and has subsequently become the standard model of operations for many campus disability programs. At the time we called it “the decentralized model,” which today is known as “the universal design model.” Duffy added, “The core principle is that people with disabilities ought to have their needs met at the point of contact and not need to be referred to a specialized unit with specially trained staff who provide special services.”

While the center is currently serving more than 2,000 students on campus, students registering for services at the center continue to increase, according to data collected by Stilson.

“There has been a 150% increase in the number of students registered with the McBurney Center since 2007. Ninety-two percent of that increase has occurred since 2013, nearly doubling the population of students served in the last 5 years.” Stilson continued, “With that population increase, I would expect to see service provision increase and I would hope that greater awareness would result.”

Alyssa Wciorka, the current McBurney Speaker’s Bureau Coordinator and a client of the McBurney Center since September of 2016, notes how the staff has significantly contributed to her success on campus, especially with the center’s assistance with media captioning, preferential seating, and notetaking.

“My favorite aspect of McBurney is the Deaf and hard of Hearing Office (DHH). The people there are wonderful and continue to provide me with the services I need to succeed academically,” she included.

Elise Witmer, another UW-Madison student and a client of the center since January 2017, recommends that students utilize the center, even if there are reservations or uncertainties if the McBurney Disability Resource Center can accommodate them or not.

“Just give the front desk a call and ask those questions that are keeping you from applying for services. They’re always willing to answer, no matter what the question, and if they can’t answer it, they always refer you to someone who can,” Witmer said.

“The McBurney Center hopes to continue efforts toward creating and maintaining a welcoming and inclusive campus environment for students with disabilities,” says Magler. “We look forward to continuing working with faculty and other campus partners on best practices. In instruction, this often means incorporating elements of Universal Design, which helps to improve access for all students and thus reduces the need for individual accommodations.”