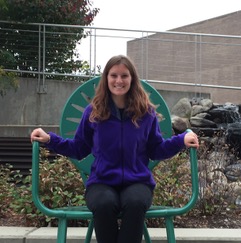 During spring 2018 semester, Mara Matovich, now a senior, was heavily involved on campus. She was a member of the Associated Students of Madison Shared Governance Committee, the UW Marching Band, and took on the responsibility of being the communications director of Senior Class Office, all on top of double-majoring in Political Science & Communication Arts with a certificate in Digital Studies.

After finishing final exams and earning 17 credits, Mara found herself in full panic mode. She didn’t have plans to work or intern for the summer and it seemed as though everyone else did. In a wave of frustration, her last-minute plan was to move home with her family and take an internship about an hour away, which she commuted to every day.

Mara already considers herself a generally anxious person, but she became especially apprehensive when she started her internship, surrounded by colleagues who had different interests than her. Her days became extremely long, every day became an identical routine, and she wasn’t exactly keen on the change of environment from campus.

Symptoms of anxiety became more prominent: heart palpitations, restlessness, and fatigue. Mara was able to temporarily comfort herself by spending time with friends and family. It wasn’t clear that something needed to be done right away because the lurking presence of anxiousness was common for Mara. Her busy schedule kept her distracted, especially during the school year, but at times, it backfired, accentuating the symptoms she felt.

Mara told a few close friends about her feelings, some of which gave her advice on their experiences with anxiety. “Sometimes, it’s best to just be a good friend when you realize there might not be anything more you can do,” Matovich said.

Matovich decided something needed to be done; her feelings weren’t going to go away. As her next annual check-up was approaching, she planned to discuss her symptoms with her doctor.

Her doctor appointment came and Mara didn’t say anything.

Regretting her decision a few days later, she called up her doctor to explain what was going on. From there, various options were suggested for her. These options included low dosage medications, counseling, and cognitive behavioral therapy. Ultimately, she decided to try out bi-weekly counseling.

When asked about her experience, Matovich reflected, “People don’t talk about it [counseling], even though it’s a common thing. For me, it has been helping. It provides a better environment to self-reflect and straighten your thoughts by talking out loud, which is much better than internalizing it.”

Since she has learned how to better control her anxiety, Mara understands that more people should be aware of the stigma associated with mental health. She sports a lime green bandana on her backpack; a symbol of the stigma-free support of mental health. The bandana indicates that it is safe to approach these people about mental health-related issues.

As she treks through the final months of her senior year, Mara continues to optimistically face the symptoms of her anxiety. “Everyone is on different steps, following their own path of life.” she said, “There are times when you have to realize that you don’t have control over everything that happens.”

If you need support, you are not alone. Mental health providers at UHS understand the complexities of student life and offer an open, safe, and confidential environment to help students through issues that may interfere with their development, well-being, and academic productivity.