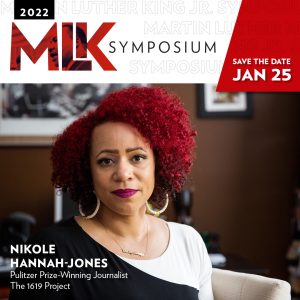 On Jan. 25, 2022, the University of Wisconsin–Madison will welcome Nikole Hannah-Jones, Pulitzer Prize-winning creator of The 1619 Project, staff writer at The New York Times Magazine, and co-founder of the Ida B. Wells Society for Investigative Reporting as the keynote speaker for this year’s Martin Luther King Jr. Symposium.

Co-sponsored annually by Student Affairs and the Division of Diversity, Equity and Educational Achievement, the event will be the week after Martin Luther King Jr. Day this year to coincide with the start of classes. Hannah-Jones will reflect on the legacy of Dr. Martin Luther King Jr. through the lens of her award-winning work investigating racial injustice and the consequences of slavery in American history.

“As both a journalist and historian, Nikole Hannah-Jones is masterful at drawing connections throughout history in ways that encourage ‘continual and fearless sifting and winnowing’ – a mantra we’ve long upheld at UW–Madison,” says LaVar Charleston, deputy vice chancellor for diversity and inclusion. “Her ability to examine the enduring impact of slavery in the United States and connect audiences across industries is powerful.”

Hannah-Jones has spent her career investigating racial inequality and injustice, and her reporting has earned her the MacArthur Fellowship, known as the Genius grant, a Peabody Award, two George Polk Awards and the National Magazine Award three times. She also earned the John Chancellor Award for Distinguished Journalism and was named Journalist of the Year by the National Association of Black Journalists and the Newswomen’s Club of New York. In 2020 she was inducted into the Society of American Historians, and in 2021 she was named a member of the American Academy of Arts & Sciences.

“The annual MLK Symposium is an event many look forward to. With it being the first major campus event of the spring semester, it gives us all a chance to pause and reflect before our busy spring schedules begin,” says Lori Reesor, vice chancellor for student affairs. “It’s important for us to highlight the work of Martin Luther King Jr. through the diverse perspectives of those carrying forward his legacy today. We’re excited to have Nicole Hannah-Jones’s thought-provoking storytelling engage our community in reflection this year.”

The MLK Symposium will take place at 6:30 p.m. Central in Shannon Hall at Memorial Union. Masks are required for the in-person event per UW policy. A virtual option is also available with registration.